Guanajuato, Gto. on May 31, 2017.- The achievements of the organization “Resplandor Internacional” in Guanajuato were exposed this Wednesday, within the framework of the International Cooperation for Development class, through the dialogue of the student and teaching community of the University of Arizona and the University of Guanajuato (UG) on the International Cooperation for Development between Mexico and the United States of America (USA).

Under the guidance of Dr. Miguel Vilches Hinojosa, professor in charge of the International Cooperation for Development class of the Bachelor’s Degree in Political Science of the Department of Political and Government Studies of the Division of Law, Politics and Government (DDPG) of the UG, this approach has been developed with young people and teachers from the neighboring country to the north.

In the Parliamentary Practice Room of the DDPG of the Guanajuato Campus, U.S. students who have worked actively in the aforementioned organization, which is in charge of educational, health, artistic and infrastructure activities in four rural communities of this capital, mainly in Cajones, where a community library was inaugurated last year, gathered.

Dr. Carlos Román Cordourier Real, Director of the Department of Political and Government Studies of the DDPG, welcomed them and congratulated them for their important social work and reminded them that the UG is their home.

Afterwards, Dr. Todd Fletcher, Director of “Resplandor International”, made a presentation of the actions, projects and programs of this non-governmental organization in Guanajuato.

Dr. Fletcher emphasized that the purpose of the organization he presides is the common good, love and science for the development of the human being, for which he is helped by many young people, both from the beneficiary communities and from various universities in his country, in this case, Arizona.

Later, there was an open dialogue between the young Americans and the students of the Department of Political and Government Studies, about the International Cooperation for Development between Mexico and the U.S. and at the end there was a get-together to strengthen the bonds of friendship. 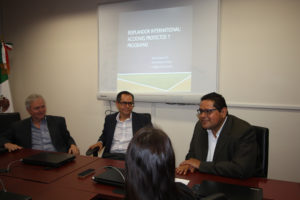 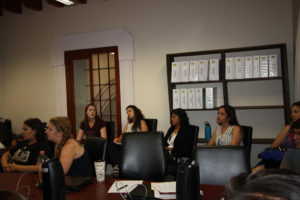 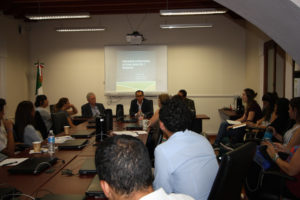